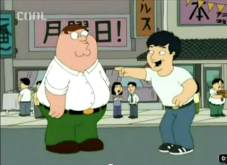 As I waited for my friends in front of Yagoto Station, a middle-aged Japanese man approached. Just seconds earlier, as I crossed the street, I noticed him standing with three others outside the Aeon shopping center. The reason the foursome stood out was because they were staring in my direction as if they were targeting me. “Ha-ro, oodju rai-ku somu tishoo?” the man politely asked.

Due to the fact that my mother, like this gentleman, spoke English using phonetically Japanese-sounding syllabary, I plainly understood he was offering me a complimentary pack of tissue. In Japan, this is the method-of-choice for many organizations who wish to advertise their business, event, or even humanitarian cause. The pack of tissue will either have whatever they’re promoting printed on the package itself or, in addition to the tissue, these solicitors might hand passersby a flyer too.

Turning in the direction of the voice, I acknowledged the man’s well-mannered offer with a smile—but never uttered a word; nor did I even glance in the direction of the hand offering the package of tissue. After taking a few steps away from the stranger, I reached for my phone to see if either of my friends had texted me. As I did so, another gentleman from among the quartet ambled up to me. “Ha-ro, how ah yoo?” It took a second or two to verify there were no messages before I looked up and made eye-contact with the blue-suited man extending a pack of tissue in my direction. Seeing me standing there just smiling back at him, his overbearing confidence seemed to take a hit. “Doo yu rai-ku tisshoo?”

Fortunately, before this stand-off could escalate any further, my friends pulled up to the curb in a brown, Honda CR-V. “Taku!” shouted Sayako from the passenger-seat as Ryo rolled down his window and apologized for being late (even though they were tardy by less than a minute). “Okurete-gomen-ne.” Before turning to leave, I glanced at the man holding the tissue one last time—just long enough to notice that his previous smile had now been replaced with a look of sheer astonishment.

Civilians on a Military Garrison

Japanese are notorious for “borrowing” other countries’ refinements and turning them into cultural specialties. J-Pop, ramen,

baseball, and curry are examples of how Japanese pick and choose certain aspects of other cultures only to give birth to their own version. Interestingly, it appears that to some degree, they have been able to apply this uncanny trait even to the system of racism/white nationalism. Although it is undeniable that the mainstream media has been whitewashed—especially in anime—many gaijin in Japan are surprised to find that while they may be revered on a superficial level, unlike other people of color, Japanese have not had the “white is right” mentality pounded into them. In other words they don’t regard Caucasians as the ultimate authority.

For gaijin living in Japan, their existence could be compared to a civilian visiting a military base: they’re acknowledged…kind of; but they are definitely insignificant in the overall scheme of things. Hence, gaijin are rarely taken seriously, being treated more as visitors no matter how long they have been living in Japan. In fact, one of the basic questions in the Gaijin Interview is: “How long are you planning to stay in Japan?” Or, it might be phrased: “When are you going back to your country?” Understanding the nuances of the Japanese Complex took some time and effort; nevertheless one of the rewards has been learning how to side-step the gaijin treatment. Mind you, this does not involve being rude, nasty, or unleashing any type of negative attitude, as those expressions only result in losing face; which, again is another character-flaw attributed to gaijin. In accordance to societal standards, I did precisely what any “normal person” would in a case of mistaken identity…I politely excused myself.

Gweilo (鬼佬), Toubob, Gringo, Cracka, and Pale-face are some of the derogatory terms that victims of racism/white supremacy all around the world use to label the invaders of their land—i.e. their oppressor. However, unlike these labels, Europeans do not seem to find the term “gaijin” to be offensive. Case in point, most westerners I meet in Japan—both black and white—are quick to refer to themselves as a gaijin. For this reason, I find it to be amusing when they show resentment if I declare that, unlike them, I am NOT a gaijin. In recent years, there have been some notable exceptions to previously accepted notions of “Who/what is Japanese?”

Nevertheless, in my opinion, this has little to do with why any melanin-rich person does not fit the description of a gaijin. We could never be gaijin for the same reasons we could never be gweilo, toubob, gringos or crackas. To put it more succinctly: gweilo are the cutthroat gangsters who forced opium onto the Chinese—which not only created hundreds of thousands of addicts but when the Chinese tried to resist, the British used this as an excuse to exterminate thousands more in the so-called, “Opium War.” The toubob are kidnappers, slave-traders and outright killers/rapists/pilferers of African lands, as are gringos and pale-faces to the Americas. Crackas are ones who crack the whip, not to mention divide and crack the unity among melanin-rich people. And, of course, we can never forget how gaijin dropped two atomic bombs on Nippon.

Please think about this the next time someone refers to you as a gaijin. Or, even more importantly, when you refer to yourself this way.

Note: This is one of the topics which will be covered in the upcoming book: Modern Japan—decoded!

Takuan Amaru is the author of the trilogy, Gaikokujin – The Story.