“Are there any questions?” Then the classroom becomes dead silent as if I asked the students to work out a complex arithmetic problem in their head. This is how I always begin my classes, whether in a classroom environment or in a one-on-one lesson. Asking students if they have any questions is a kind of inside joke. Emphasis on the word “inside” because this joke is only effective inside Japan. Allow me to explain. Unlike students of many countries, Japanese students are not encouraged to think critically about anything. Therefore they are at a loss when it come to knowing “how” to think. But somehow they know “what” to think. Now, of course, it could be argued the western education system is similarly based on mind-control tactics, especially in subjects like history. And you won’t get any argument from me. However, I’m talking about a subconscious programming far beyond what most people can imagine taking place outside of a mental or correctional facility.

Following World War II, it has been said that much of the credit for Japan’s incredible industrial success has been due to its well-organized education system. Western experts cannot applaud its merits any louder, claiming how Japanese students consistently score higher on math and reading tests than students of other industrialized nations. This is a flawed comparison as I’ll demonstrate later. Nevertheless, I must admit when I attended my initial Entrance Ceremony at a small high school in Shizuoka Prefecture in the late ’90s, I too was under this illusion.

From a western perspective, one of first impressions of a Japanese school is the military-like uniformity. This spirit of conformity permeates the entire society and is, in fact, the essential ingredient for the recipe the western world h

ails as such a success. During my first two years, I naturally searched for the benefits of everyone striving to share “one-mind”. Of course I noticed the brass-buttoned Prussian school uniforms for the boys and the sailor uniforms for the girls. Actually, I liked them at first.
This was probably because I recalled how much pressure I felt as a student in the U.S.A. during the first week of school. Much of this pressure was centered on whether your parents could afford to buy their children the latest styles in fashion. Put another way, students who wore last year’s styles—or even worse hand-me-downs from their elder siblings—were razzed to no end. Well, no need to worry about that in Japan because not only does everyone strive to wear the same clothing but, in addition, almost everything about a student’s appearance must be in accordance with the established code; this includes their haircuts as well as skirt-lengths (for the girls). Now, for someone who only visits a Japanese school once or twice, it might appear the students are in perfect harmony and all is at peace. However if the same person cares to take a longer, more careful look, things start to look a bit different.

I really began noticing the effects of all this imposed harmony after my third or fourth year. By this time, I was working in the Kansai District. I had the opportunity to work part-time at three universities and a jr/sr high school before settling at a private, Buddhist high school in Kyoto City. Something that caught my attention was how teachers were assigned to patrol the school’s front gates each morning for students who violated the hair or uniform codes. I observed with more than a little curiosity as female teachers took out rulers to measure some of the girls’ skirt lengths from their knees. For those not meeting the stringent standards, they were sent back home

. But it’s impossible to inspect every student, so inadvertently some with long or even dyed hair would slip past the patrols and enter the school. Seeing this skit being played out every day, I realized there was a constant battle being waged by the students against the teachers and this notion of 100% conformity. With this in mind, I approached one of the elder statesman among the teachers. Kinoshita-sensei was a history teacher and also a Buddhist monk. Over the years, we had many interesting conversations; mainly about ancient spirituality and history.

“Ima-wa yoroshi-desuka?” I said one afternoon walking over to where an older gentleman was sitting at his desk sipping tea as he read some documents. Because it was just after lunch the teacher’s room was nearly empty. Kinoshita-sensei, with his grey-flecked mane and circular black reading spectacles, looked up at me and slightly bowed his head. Since he remained silent, I resumed. “In Japan, it’s not the school’s job to teach the students reading, writing, and math because they learn that at the juku, right?” I said, hoping he understood I was continuing a conversation we were having a few days before.

Gakushū Juku (学習塾); or “Juku” are afternoon / evening study lessons. It is often translated as “Cram School.” So after their 8-hour day at school, students then go to 3-4 hour cram school lesson. There they study specifically for passing whatever important examination is coming up next.

“But this is only half of the story. What is the other half?” Kinoshita-sensei inquired in an innocent tone wearing a wry grin. “If what you say is true, then what exactly are we doing here at school?”

“Keeping them busy? Controlling their time?” I probed, half-guessing in a not-so-confident tone.

“Hmm,” is all he said which was his custom whenever my replies didn’t hit the nail on the head. Then an idea popped into my head like a shot in the dark. “I gottit!” As I spoke I reviewed much of what I’d witnessed at various schools over the past few years. “You’re teaching them,” I continued, “how to accept their role in society…how to endure, to ganbare, together as a team.”

“And what can we sum all that up into,” he asked in his native Kansai dialect.

“Umm…I guess it sums up to you’re teaching the students how to be Japanese.”

Hearing this, Kinoshita-sensei stood up and faced me. “Amaru-sensei,” he replied still smiling. “You have become a true Japanese. You now understand the true face of Japan. You’ve learned to see beyond the tatemae (officially stated position), to the honne (true intent).”

This concept of “Tatemae” and “Honne” runs deep in the Japanese psyche. Actually, Kinoshita-sensei illustrated both terms very nicely in our dialogue. His praise of my realization was “honne” but he definitely didn’t see me as a “true Japanese.” I’m not saying he was lying…it was just “tatemae.”

In truth, Japanese schools resemble basic training, boot-camps. For example, students stand (or sit) in formation every day, march with the school’s official colors, and are 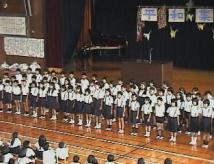 required to train as a cohesive unit with the other students in their homeroom. And unlike American high schools, it’s the teachers not the students who change classes. So the students spend all four years with the same group in the same room. In most schools, they even eat lunch in their homerooms. Although it’s possible to make friends with students outside their homeroom, it’s not a frequent occurrence. The only exception are teammates on a sports team or other club activity. In short, school is about learning to stick together, obey, and accept the role given to them by the “group.” This is tantamount to understand before graduating and entering society. Dr. Miyamoto Masao, formerly a member of the Ministry of Health and Welfare, calls this process “castration.”

In his own words:

“Driving through the English countryside, you see many sheep grazing on the hillside, which brings a feeling of peacefulness. This peacefulness is exactly what the bureaucrats want to obtain in Japanese society. But I want to emphasize that they want this peacefulness because their ideal image of the public is one where people are submissive and subservient. With such a group people are easy to control… How do the bureaucrats manage to castrate the Japanese so effectively? The school system is the place where they conduct this process.”

And this programming begins in nursery school. After I decided to end my high school teaching career, I moved to Kagoshima Prefecture. This is when I started writing full-time. To make ends meet, I taught English to kids. This included visiting six nursery and pre-schools. Before moving to Kagoshima, I used to wonder how Japanese had been programmed so identically. It seems every Japanese person, no matter what region they’re from, thinks exactly the same way. This phenomenon is magnified when considering some of their commonly held stereotypes about Americans. One example is how they are convinced all Americans celebrate Christmas. I’ve actually had some students try to convince me that I was wrong when I explained I don’t celebrate Christmas. After I introduced them to the Jewish holiday, Hanukkah, I had them research it on the internet for homework in Japanese. Only then did they believe me. Another example is how they assume everyone outside of Japan speaks English. You should see the quizzical expressions when I talk about Spanish Harlem or areas in Miami that cater to Spanish speakers. One lady who worked at a printing company where I taught the employees accused me of lying. After we probed for details, she admitted she had never been out of Japan—even for vacation. So why was this lady so convinced about something she herself readily admits she knows absolutely nothing about? The only possible answer is: she’s been programmed. Programmed to think all Americans celebrate Christmas, or speak English…or whatever. “All Americans.” It’s probably in vain but I do my best to explain why this phrase in itself almost certainly determines whatever follows will be an error. This, of course, is due to the wide diversity of race and culture in the US.  “All Americans means exactly who? Blacks? Whites? Latinos? The LGBT community?” Japanese are shocked to find that each community has its own voice and opinion because in Japan, there is only room for one voice and one opinion.

Japanese have the most difficult time understanding there are Jewish holidays in the US that only some schools or regions recognize.

There are no private holidays for specific religions or regions in Japan. Every school from Hokkaido to Okinawa starts on the same day, at the exact same time, and celebrates the same holidays (with very few exceptions). The entire society is run in this way. This may be both the strength and weakness of the society. This leads us back to the fallacy of the Japanese having a superior school system. In Japan, since everything is uniform and everyone must move in unison, there is not much difference between the “good schools” and the “bad schools,” whether public or private.

So their mean test average is going to reflect this. Well, in the western nations, if we compare a public school in say, the South-Side of Chicago or East St. Louis with a private school in the lily-white suburbs, we’ll find the difference between night and day. On that note, I’d like to see a comparison of only the private schools’ test scores in each country. Similar to Dr. Miyamoto, other prominent Japanese have decided to speak out against the Ministry of Education,

Culture, Sports, Science and Technology (文部科学省). Here is what former Prime Minister Hashimoto had to say in his 1997 New Year’s address to the nation:

The present education system just crams knowledge into children’s heads. It values memorization too much. The system doesn’t allow children to decide dreams, hopes, and targets by themselves.

Stay tuned for the next edition of The Japan Series!

Takuan Amaru is the author of the trilogy Gaikokujin – The Story